About half a year ago I ordered a ticket for Elbriot, which is a small metal festival in the middle of Hamburg. It used to be just one day, but was turned into a two day festival this year with bands such as Sabaton and Slayer playing. I was really looking forward to it.

But then in June another Innogames Gamejam was announced. Bigger, better, Gamescom. The idea was to have a gamejam in one of the big congress halls above the Gamescom during the first three days of the Gamescom. The 50€ ticket included a Gamescom ticket for the three days, the possibility to sleep there and food. So all in all a really nice deal and thanks to founding from Intel and other sponsors they flew in people from all over the world.

Of course I immediately registered :D

I travelled by train and got there a day early in the middle of the day and got a cheap room in some hostel close to the Köln Messe (Which all together was still cheaper than the early train on Wednesday).

We were supposed to get our tickets at the Gamescom at 10, so I arrived at 9:20 or something and had to wait until 10... Together with lots of others. It would have been nice if we could have gotten in earlier, but I guess they had their reasons.
I suck at talking to people I don't know, so I was just waiting and eventually got my ticket. Unfortunately they were still preparing the hall for us and didn't let us in, but were nice enough to allow us to drop off our things. I somehow ended up talking to two turkish and a french guy and we decided to take a short tour around the gamescom until the gamejam started.
We lost the french guy somewhere (he told us to go on while he was checking out some booth).

We didn't really get to see anything in these 1.5h but had a good idea of what was were. When we made it back to the location of the Gamejam they let us in and being Artist, Gamedesigner and Programmer we decided to be a team.

At some point there was another Gamedesigner and another Programmer interested in helping us, but I scared them away with my choice of SFML... So in the end we were a team of three people.

There was a keynote in the beginning of the jam by Adriel Wallick, which had it's moments, but in my opinion could have been a bit shorter.
Then the theme was announced: Masks

The organisers tried some get to know you games, which weren't too bad, but not really my thing either -.- A nice touch was them trying to split up existing teams of people knowing each other into new teams by having everyone talk to anyone with similar game choices, which seemed to have worked pretty well.
I sticked to my small team anyways but was still trying to find another programmer that didn't only want to do Unity. I failed.

Being the press day of the gamescom it was the only day with the possibility to get to see a few games with less than an hour of waiting. I also had a Sony VR presentation scheduled at 16:30. We took something to write and found a first line to stand in and brainstorm some ideas. This was actually a great idea, but unfortunately the line was too long so I had to leave early for my appointment at sony... When I got back the others finally made to the game and got to play for a really long time. I decided to walk around some more and catched an underwhelming presentation of Mafia 3 (I love the series and I am sure the game will be great. But the presentation wasn't...). Also Playstation VR reminds me a lot of the Oculus DK2, but with lots of interesting adjustments to be made to the headset. If the games are good (and some will be) it makes a solid VR headset.

At this point the gamescom was almost over and we went back to the jam. Somehow we finally came up with an idea for a local multiplayer game.
Then we got dinner which turned out not to be enough for everyone so additionally some pizzas were ordered.
They did learn from it for the next day. But in general the food and drink situation could have been better.

Engin, our Gamedesigner was figuring out gameplay details and Can, the artist made some placeholders for me. Then they both went to bed early and I stayed up until 4:30 to get an earlier prototype working. Based on the good experience with Huitzilopochtly I used SFML and Box2D again and was able to reuse some of the basic code I wrote before. In the end it was possible to move around and throw masks.

I got up for breakfast at 9 (I slept behind our table on my very comfortable new sleeping mat with earplugs), Can and Engin were already doing things.
I spent the day implementing the intended mask bahviour and had something fully working an hour after the playtesting on the stage ended in the evening...
By then I also had most of the graphics.

The last night was used for a start screen and sounds and I even made OSX and Windows builds of the game as a test run and finally decided to sleep at 6:30.
Getting up again at 9 was hard, but being the only programmer I didn't really expect to sleep at all and it was enough to get me through the day.
This time the others also stayed up as long as I did, working on additional graphics and improving the start screen.

In the morning I implemented a game over screen and animations for everything. And made Windows and OSX builds. Since we still had 10 minutes until the deadline I spent those adding better transitions between screens and a control screen in the beginning and was done 5 minutes late :D.

The judges were running around and testing the games. I think three actually saw our game and have no idea if that's how it was supposed to be or if there should have been more...
We also managed to crash the game a couple of times when playing ourselves, fortunately it worked for others.
There was an award show in the evening at 7. Unfortunately I had to catch my train by then. I am pretty sure we didn't win anything, but I also don't know who did.

I spent Saturday at the Elbriot, which was also nice :D.

This is us on the second evening... 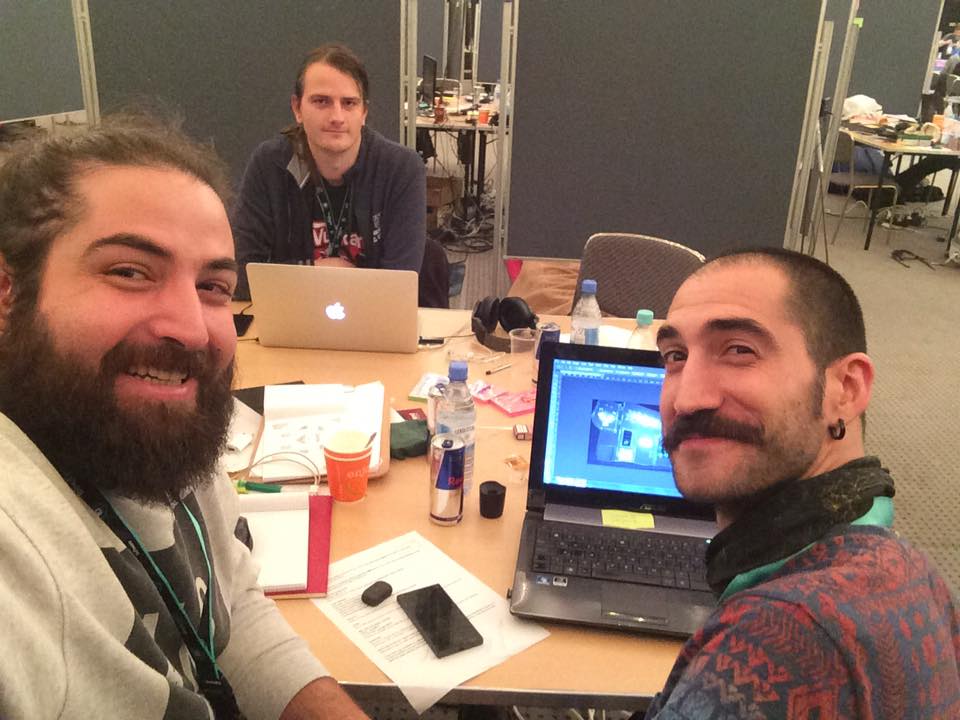 A short gameplay video of the game.

It can be downloaded on the Gamejam page: Maskplosion

You can also find the other games there. 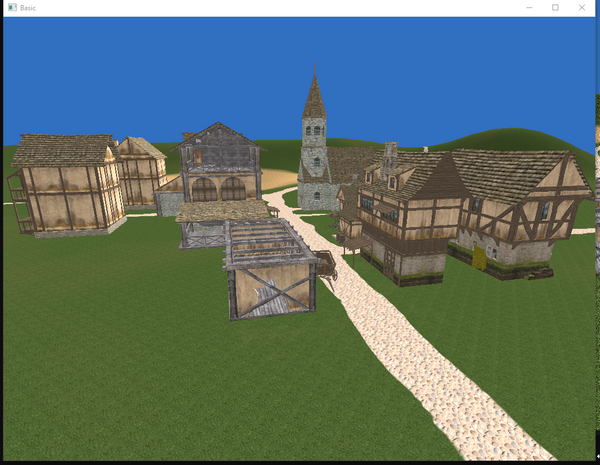 Introduction If you start writing a 3D graphics engine, the basics usually consist of loading mesh, texture and shader data and getting it to the GPU in a way that enables the GPU

Inertial Measurement UnitI am using the Sparkfun 9DoF Block for Intel Edison which has an accelerometer, gyroscope and magnetometer. And while the accelerometer points down if it does not move it might also